Wedding by the beach | Tulum, Mexico

Ant and Ira’s love story started when they first met in Camden Town, London.
They met through their bestman, Carlo, as he was dating Ira’s cousin at the time and Ira happened to be visiting London during her Europe travels. Ant was actually hung over the day they met and it was only through Carlo’s persistence did he finally agree to going out to meet Ira and her cousin. Little did he know, that that decision would end up being a life-changing one.

From Carlo’s heart-felt bestman speech, it was evident that it was love at first sight. He recalls it as “witnessing fireworks” between the two of them and detailed how they spent countless hours having daily Skype calls to each other despite the timezone differences and how Ant stopped his wild partying ways so he could save enough to move out to Mexico to be with his love.

Moments before the actual ceremony, the weather was nervously alternating between sunshine and light showers. It was only till the actual ceremony itself, did the rain stop and a rainbow appeared! The sunshine was a welcomed relief but to have a rainbow too was the icing on the (wedding) cake.

The wedding itself was a true testiment of their love and commitment to each other. Every single detail playfully hinted to each of their cultural backgrounds yet complemented each other perfectly. Ant’s skills as an artist and illustrator were seen throughout the decorations, beit the stunning papel picado’s he designed to the invitations and table settings. Ira’s management background ensured everything ran smoothly and was planned perfectly down to a tee.
Guests were treated to mini pottery jugs to wear around their necks which was filled throughout the night with shots of Tequila, the rattling sound of maracas were heard amongst the cheers and applause after the ceremony concluded, traditional Mezcal was used to toast the speeches whilst a traditional naked-cake was cut. Guests were treated to a playlist of both Mexican and English classics whilst being handed out an array of Mexican masks and glow sticks to wear as they rocked their moves. A variety of traditional Mexican snacks were on offer for those who shyed away from the Tequila train, led by the bride and groom themselves.

The evening ended with a Mariachi band who appeared at midnight to serenade the newly weds whilst guests watched on, drinking hot cocoa and munching on Churros.

Congratulations to the happy couple and thank you for making me a part of your incredible and heart-warming journey.
I’m always so thankful to get to do what I love doing but more than that, I’m truly honoured to get to witness moments like these. 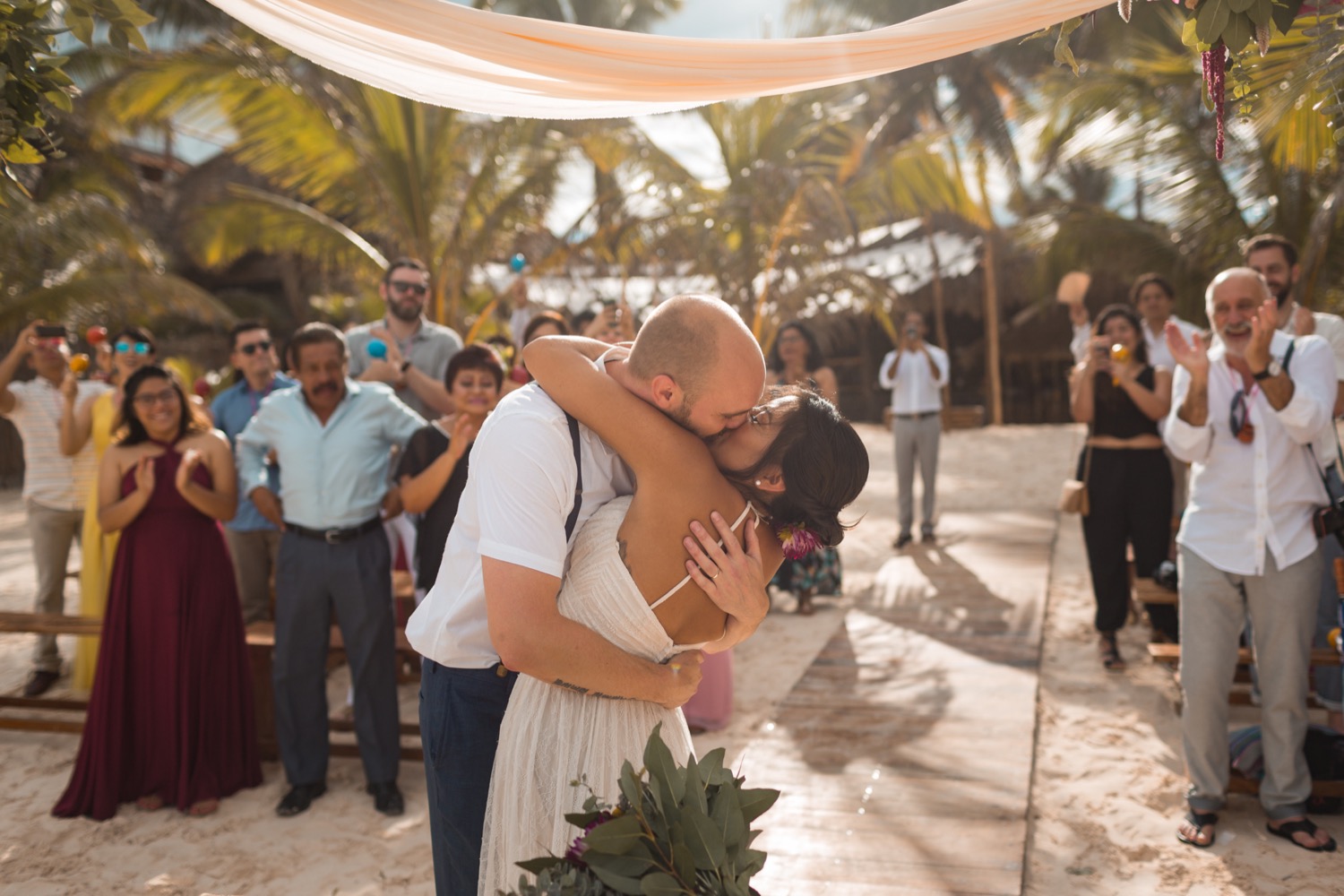 If you are looking for a wedding photographer for Tulum or in Mexico, please get in touch. 🙂

Thank you! Everything was perfect on that day! 🙂

This site uses Akismet to reduce spam. Learn how your comment data is processed.

Based in the UK, focusing on crafting beautiful memories for your wedding day. Huge believer of documentary, story-telling and natural approach of photography style.

We use cookies on our website to give you the most relevant experience by remembering your preferences and repeat visits. By clicking “Accept All”, you consent to the use of ALL the cookies. However, you may visit "Cookie Settings" to provide a controlled consent.
Cookie SettingsAccept All
Manage consent

This website uses cookies to improve your experience while you navigate through the website. Out of these, the cookies that are categorized as necessary are stored on your browser as they are essential for the working of basic functionalities of the website. We also use third-party cookies that help us analyse and understand how you use this website. These cookies will be stored in your browser only with your consent. You also have the option to opt-out of these cookies. But opting out of some of these cookies may affect your browsing experience.
Necessary Always Enabled
Necessary cookies are absolutely essential for the website to function properly. These cookies ensure basic functionalities and security features of the website, anonymously.
Functional
Functional cookies help to perform certain functionalities like sharing the content of the website on social media platforms, collect feedbacks, and other third-party features.
Performance
Performance cookies are used to understand and analyze the key performance indexes of the website which helps in delivering a better user experience for the visitors.
Analytics
Analytical cookies are used to understand how visitors interact with the website. These cookies help provide information on metrics the number of visitors, bounce rate, traffic source, etc.
Advertisement
Advertisement cookies are used to provide visitors with relevant ads and marketing campaigns. These cookies track visitors across websites and collect information to provide customized ads.
Others
Other uncategorized cookies are those that are being analyzed and have not been classified into a category as yet.
SAVE & ACCEPT